1 down, 19 to go!!!  Day 1 of Proton Radiation Therapy is officially in the books.  Other than needing a blood transfusion after radiation, the day went as smoothly as can be expected.

We arrived at the Proton Therapy Center early in the morning to meet with Caroline's prep team (nursing, anesthesia and radiation-oncology).  After getting her morning vitals and being evaluated by the doctor, Caroline walked back to the Proton Radiation room, got settled, laid down on the table, and was administered IV sedation medication.  Approximately 30 anxiety-filled minutes later, we were escorted back to see Caroline in the radiation recovery area.  She was already fully awake and acting like her normal, silly, loving self.  In fact, the nurse said she has never seen a child "come to" as quickly as Caroline did today!  We are glad that she was able to bounce back so quickly after the treatment and sedation.

Caroline required a red blood cell transfusion due to low hemoglobin numbers, which took about 4 hours, after which she was released to relax at home (our short-term housing).  The rest of the today will be spent working on Kindergarten homework and resting in the cool air-conditioning, to escape the unseasonably HOT September Ohio temps.

We are so very appreciative of all the prayers, kind words, messages, meals, UberEats gift cards, donations, and most of all love and support from so many near and far.  It means the world to our family during this very disruptive time in our lives. 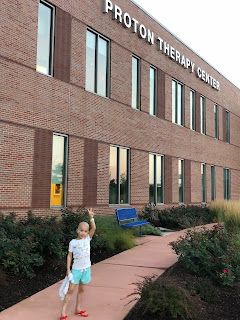 Arriving at the Proton Therapy Center. 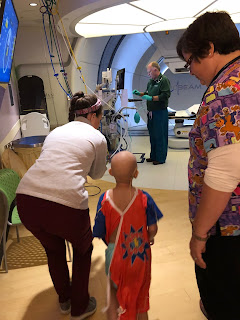 Walking herself back into the room. 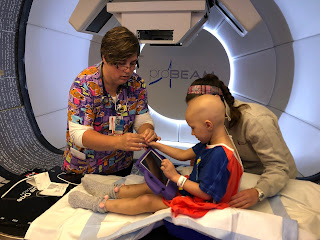 Distraction while they prep for anesthesia is the best! 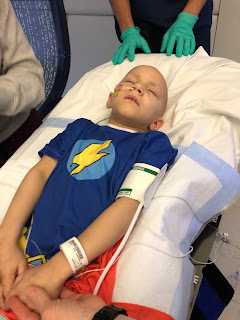 Sedated and ready for Proton Therapy! 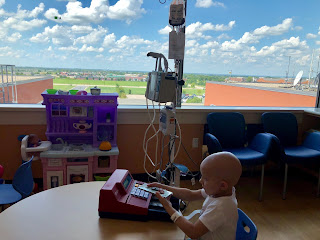 In the playroom while getting blood...great view!
Posted by Margaret Lantz at 3:05 PM