Caroline's surgery for her vascular catheter on Tuesday was successful (once again, she walked back to surgery!).  She spent most of Tuesday afternoon recovering from the procedure and waiting for the apheresis machine to become available...it was being used by another little girl (baby) with the EXACT same birthday (different year) as Caroline, who was diagnosed with Neuroblastoma, on the EXACT same day that Caroline was diagnosed; we're on the exact same treatment protocol and timeline.  We are now praying daily for her, and her family, to receive excellent results and perfect healing!

There were some complications in getting the machine for Caroline on Tuesday, so we spent the night in the hospital.  The hardest part of spending the night was for Caroline - she had to keep her leg stick-straight, and lay flat from the time the catheter was inserted, until it was removed...hard for a kid.  We were admitted to our usual floor (6A), where Nurse Katie welcomed us back with some sweet notes!  We appreciate all of the folks at Vandy - they truly make a difference in helping us get through this!  Caroline was able to give back to them a little, too...pic below is her looking to hand out "nurse pendant watches" to her caretakers.

To pass the time on Tuesday, Caroline had a visit with Music Therapy.  She had a great time, and they were able to distract her yesterday afternoon while she waited for the machine...cheered her up when she wasn't able to have the procedure on Tuesday, and they were there for her on Wednesday morning when she was (finally!) getting connected.  I had a hard time keeping it together when they were singing "Get Back Up Again," one of Caroline's favorite songs from the movie Trolls; listen to the chorus - it's incredibly appropriate for her week, and her situation in general.

The apheresis machine was rolled in around 9am.  It took about an hour to "prime," and then they started the collection, which took about 3.5 hours, followed by the lab picking up the collection in an old-school cooler, so they could do counts and confirm they had what they needed.  About an hour later, we got the best news we could hear for this step: her counts were EXCEPTIONALLY high, and they were able to collect TRIPLE what they had hoped to collect.  This means that she will have everything she needs for the upcoming stem cell transplants for this protocol, but also for the future "just in case" scenarios.  After this was confirmed, they were able to remove the venous catheter at her bedside, which was a very hard thing to watch...I can't even imagine what it felt like for her.

We're resting at home now, and plan on being able to stay home until Monday or Tuesday, when her next round of chemo (#4) begins.

We've included more pictures than we usually post, since this is hard process to explain... 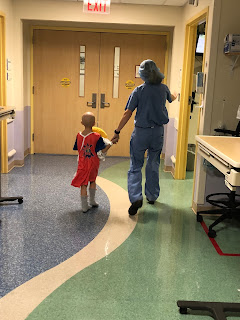 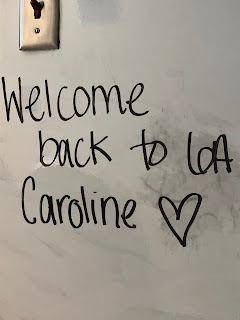 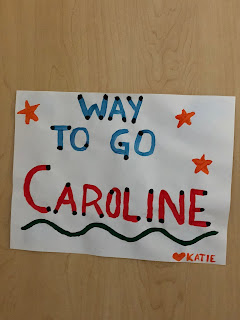 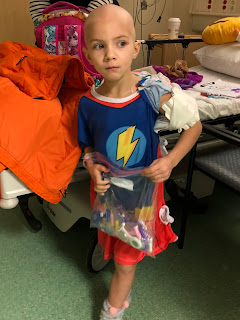 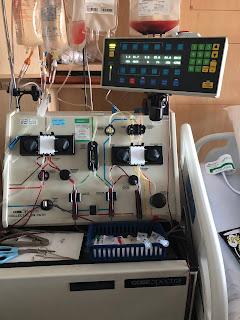 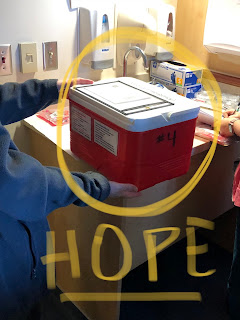 Thank you for the continued prayers and support.  We feel the love!